HomeBlog5 Most Expensive States to Live In for Travel Nurses, Based on Cost of Living.

5 Most Expensive States to Live In for Travel Nurses, Based on Cost of Living. 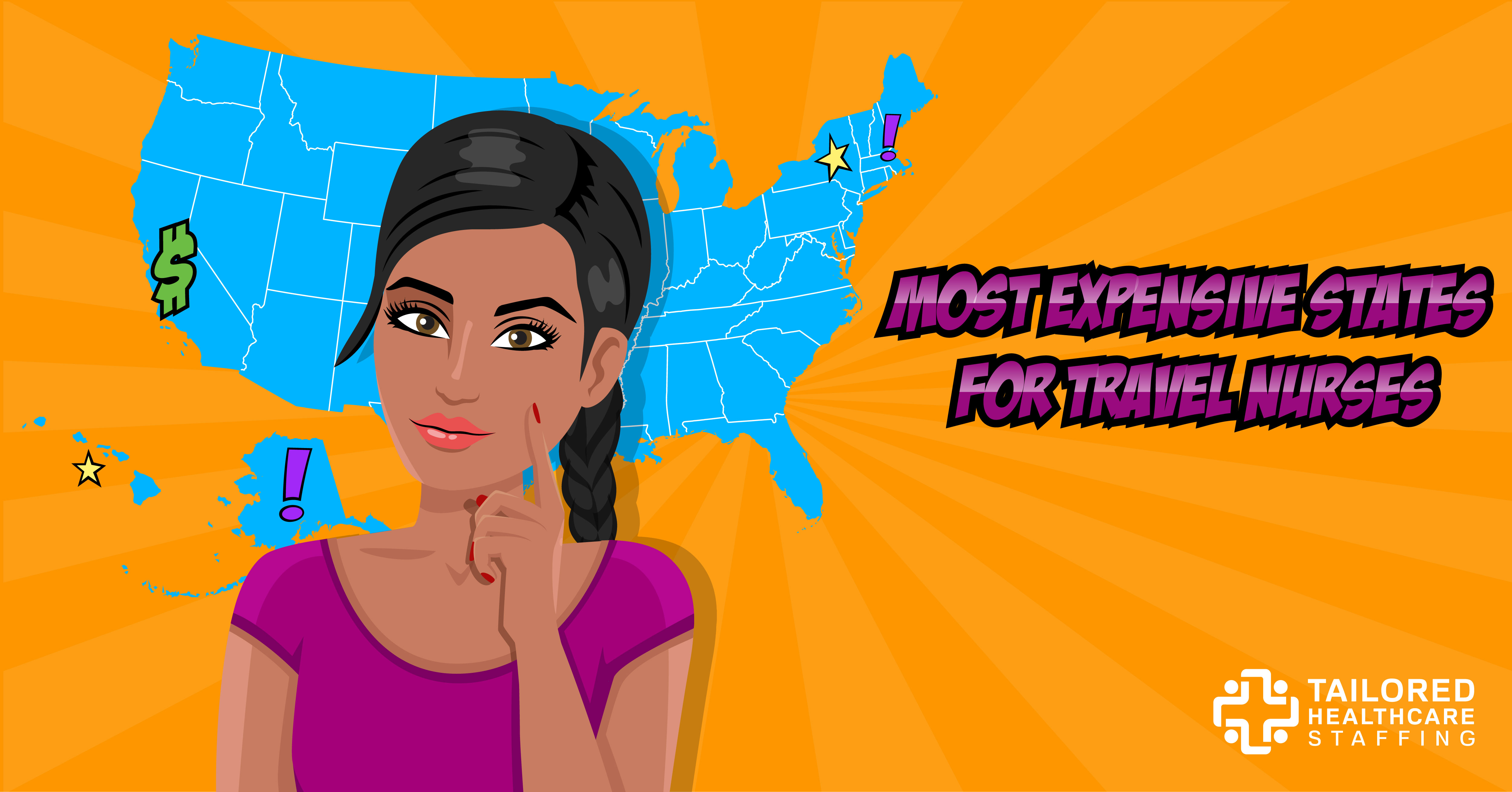 Travel nursing attracts RNs for a variety of reasons. Some wish to see the world, others are eager to gain experiences offered in different hospitals. Some travel nurses are lured by the promise of better pay. Regardless of the motivation, no nurse wants to lose money while traveling—even if the views are amazing. Anyone considering the travel nurse life will want to weigh compensation packages against an area’s cost of living to better the chances of financial success. Check out the 5 most expensive states to live in.

CNBC used the Council for Community and Economic Research’s 2016 annual average Cost of Living Index to compile a list of the most expensive states. The list was made using common grocery cost, energy bill, doctor visits, and home price.  Not overly scientific, this list gives a good indication of where a travel nurse might have more money going out. Then comes variation in pay for travel nurses. It gets tricky. Compensation packages are multi-factorial, and are difficult to compare apples to apples. Regardless, read on to prepare yourself for assignments with hospitals in the five most expensive states for travel nurses, based on cost of living.

The fifth-most-expensive state in the country to live in is also America’s northernmost. Due to a lack of farms, most food consumed by Alaskans must be produced elsewhere and shipped into the frigid state, leading to far more expensive products than breadbasket states. Lack of daylight during certain times of the year and icy weather drive up energy prices. Medical professionals are few and far between, so a routine doctor’s visit can be pricey as well. However, the shortage of medical professionals in the state may improve your salary as a travel nurse. In fact, the median salary for Alaskan nurses is more than $84,000—fourth-highest in the country. It might be expensive to stay warm, but can you really put a price tag on seeing the Aurora Borealis?

On the opposite side of the country, and back in the contiguous 48, Massachusetts is the fourth-most-expensive state in which to live. Notably, it’s more expensive to heat your home in Massachusetts than in Alaska (seriously). A doctor’s visit is considerably cheaper, though. Rent in major Massachusetts cities is absurdly high, but nurses in Massachusetts have the fifth-highest salary in the United States, at $84,410. With some of the best hospitals in the country, it might be worth the high cost of living to gain experience in such incredible institutions.

With a range of climates and natural phenomena to behold, it’s easy to understand why California is an in-demand travel nurse destination. Additionally, it’s the highest-paying state in the country, with the median salary in the six-figure range. Housing costs are astronomical (the average home price is over a million dollars), but fresh produce is more reasonable than other states.

The disparity between cost of living and median RN salary is the greatest for the state of New York. It’s the second-most-expensive state to live in and boasts just the seventh-highest median RN salary, at just over $80,000. It’s important to note that there is a huge difference between the cost of living in Manhattan and upstate New York, however.

Similar to California, the allure of Hawaii to travel nurses likely outweighs its significant cost of living. Fortunately, Hawaii is the second-highest-paying state for nurses with a median RN salary over $90,000. Almost all goods must be shipped into the state and energy costs are astronomical—more than $400 per month in energy costs alone. However, as a travel nurse, you do get to offset the cost of a months-long vacation in Hawaii by working a few days a week.

Cost of living can vary widely within a state—a destination shouldn’t be written off because of expensive living costs. Conversely, don’t be drawn in by big numbers on your contract. Prior to signing, consult your recruiter on how you will be able to maximize your take-home pay as a travel nurse. You can breathe easy knowing you will have fewer monetary surprises when you arrive in a new city and can focus on caring for patients and enjoying your temporary home.

How Long Does a Travel Nursing Assignment Last?